Pipe Stress Analysis deals with issues that arise from the thermal growth of piping. It is a niche area of engineering that is not widely taught in schools.  40-48% of the engineering labor hours in a new plant build go towards piping and the high-temperature piping, where pipe stress analysis is required, is the most engineered portion of the piping system.

The challenge PT&P has seen is that the majority of people who tackle Pipe Stress related issues and maintenance daily do not have a background in Pipe Stress Engineering.  In addition, most plant maintenance, engineering, inspection, and turnaround personnel have a broad set of responsibilities and Pipe Stress may be a minor portion of these responsibilities.  PT&P has put this primer together for those who want a basic understanding without getting into the detailed engineering and knowledge of how to run a Pipe Stress program such as Caesar II or Auto Pipe.

As can be seen from the chart below, the issue of thermal expansion can be even greater with some non-metallic materials used in piping systems. 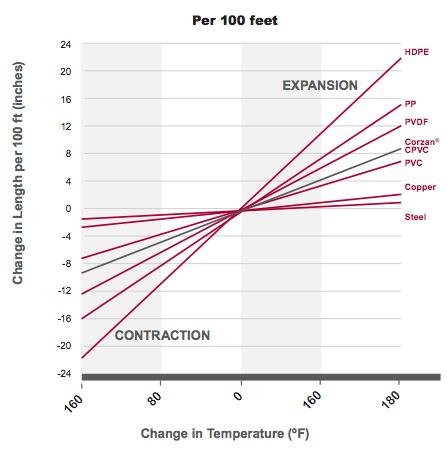 Thermal growth is too powerful to be contained.  The key to Pipe Stress engineering is managing and directing thermal growth. Directing and Managing thermal growth is possible because thermal growth will always find the Path of Least Resistance. Effective Pipe Stress Analysis designs a path of least resistance that can effectively absorb the required thermal growth while continuing to support the piping and keep loads at key points in the system such as nozzles below maximum allowable load.  As the father of 2 teenagers, I have found one of the easiest ways to think about the challenges of thermal growth in piping is comparing to my teenagers.

The path of least resistance is defined by the most flexible elements of the piping system from anchor to anchor.  Below is a view of elements from most to least flexible that are used by Pipe Stress Engineers:

The charts below show how Expansion Loops, Z Bends, and L Bends deform under thermal growth to absorb thermal expansion.  Because all of these almost always have less flexibility than an expansion joint, they require more room to absorb the same level of thermal growth.

Because Piping Technology and Products started as a Pipe Stress Engineering company, we are the only Global Provider that manufactures a complete line of major solutions for Pipe Stress.  The following is a view of the different solutions we offer:

The only way to manage thermal growth in larger piping systems is to use Anchors (points of maximum resistance where the piping is tied down to structure) to break Thermal Growth Management into smaller sections of piping.  It is important to note that Equipment is typically anchored and therefore acts as an anchor.  However, the goal with equipment is to minimize loads at the nozzle.

The diagram below shows expansion joints, springs, guides, and anchors.  In this case, thermal growth is leading horizontal growth on the upper and lower sections of piping and vertical growth on a vertical run of piping.  The system anchored at the ends.  Thermal Growth will move away from the anchors which means it will move towards the vertical run of piping on the upper and lower horizontal lines.  The Expansion Joints facilitate the movement of piping shown in the red outline which is driven by thermal expansion on the various runs of piping.  The variable spring support allows for the load of the vertical piping to be carried even when the pipe moves upward as shown in the red dotted lines.  The guides are used to ensure proper movement of the piping and to prevent the Expansion Joints from buckling or squirming. 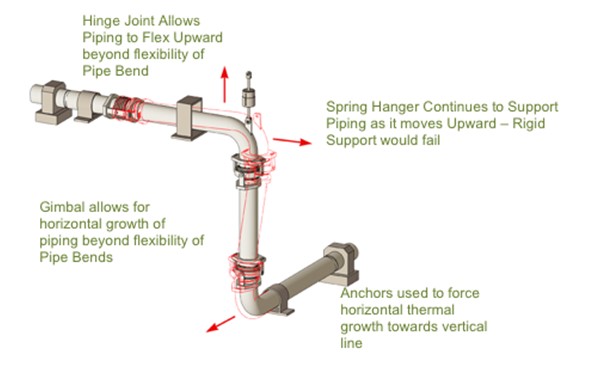 Many situations require evaluation without the benefit of a Pipe Stress model.  In this case, some keys to initial assessment:

Pipe Stress Component Glossary for Dummies (can we just put a link to current PT&P Glossary?)

Anchors (point of maximum resistance to movement) – this is a point where the Pipe is secured to structure making it extremely difficult to move.  The purpose of an anchor is to force all thermal movement to occur away from the anchor towards points in the piping system which are more flexible.  This is one means to control and direct thermal growth.   NOTE: Equipment is typically anchored and therefore acts as an anchor in the system.

Guide – this is the support that allows the pipe to move freely in one direction while restricting movement in other directions – therefore ensuring thermal growth occurs in the desired direction.

Variable Spring Support –used to provide continuous support to the pipe as it moves vertically in scenarios where a rigid support would either not rise to support the pipe or would not move downward to get out of the way of thermal growth.  Variable supports allow up to 25% load variation.

Constant Spring Support – same function as a variable spring support but with only up to 6% load variation.

Snubber – functions similar to a seat belt allowing free movement except in the case of an event (such as Seismic, Water Hammer, Slug, etc.) at which point it becomes a rigid support.

Sway Brace – uses a spring to dampen vibration.  Spring compresses in both directions.

Sway Strut – allows movement in 2 planes but remains rigid in 1 plane of movement.  Used to ensure separation of 2 items such as Pipe and Structure in the case of an unexpected event. 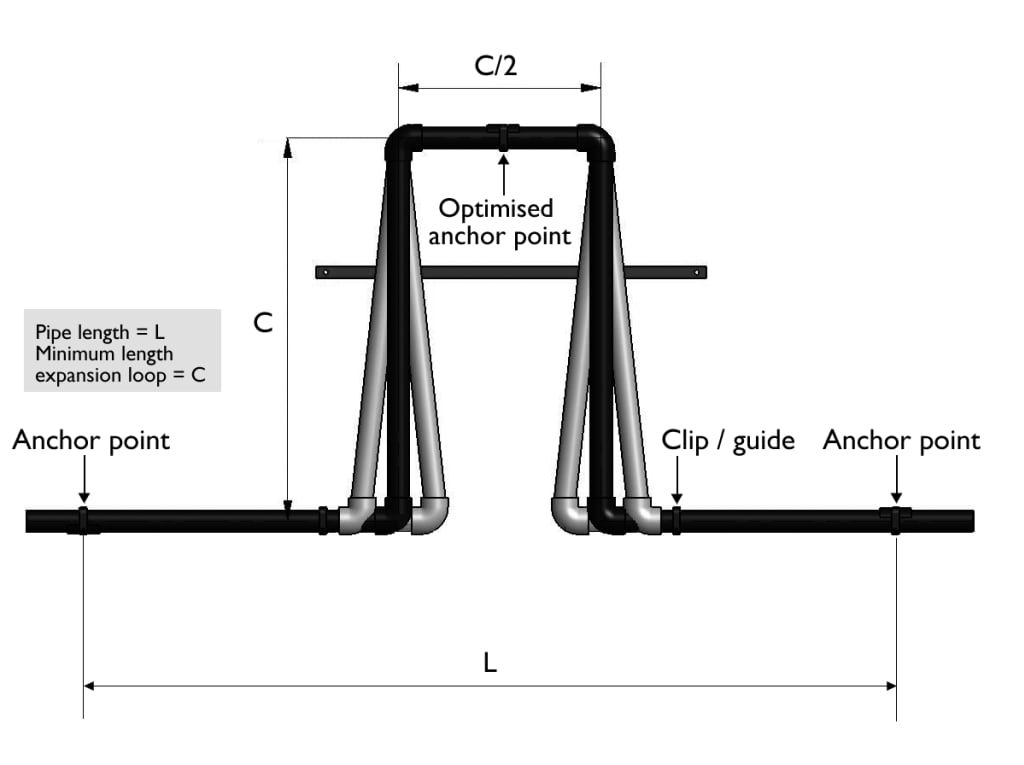 Z and L Bends – changes in the direction of piping or bends are used to absorb thermal growth.  A picture of a Z and L bend and associated deformation is shown below. 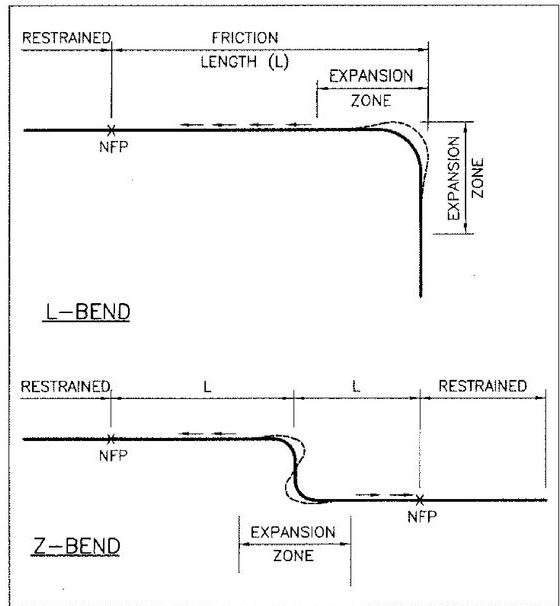