Piping Technology and Products has the deepest expertise of any global provider in conducting Spring Support and Expansion Joint Audits.  We are the only major global manufacturer of Expansion Joints and Engineered Pipe Supports.  We are also the only major manufacturer to have started as a Pipe Stress Engineering company.  This gives us both stress-analysis and product fabrication level expertise that is unparalleled.  In addition, we have a database built from over 1000 audits performed in 41 countries by our field services division as well as real-world experience from over three million Pipe Supports and Expansion Joints currently in service.  Figure 1 is a snapshot of data from our proprietary database showing the average Spring Support Failure curve across all geographies and plant types.  Such a curve shows the dire need for spring support audits due to the high failure percentage as a function of years in service of the spring support.

Our approach to Spring Support and Expansion Joint audits is unique.  When we conduct an audit, our goal is to check the spring supports and expansion joints, assess the conditions, estimate loads, and recommend a plan of action in order to return the piping system to the original design parameters per the Pipe Stress model.  The following are some of the goals of Pipe Stress Engineering and the placement of Spring Supports and Expansion Joints in the piping system:

Case Study A shows an example of a program PT&P used for a turnaround at a major refinery.  To conduct a complete Spring Support and Expansion Joint audit, it is important to not just focus on the health of the piping system components, but on the health of the overall piping system.  The following are some of the issues that PT&P has found that cause system-level issues:

By the time a plant reaches 10+ years of age, PT&P’s experience is that most plants have encountered one or more of the issues above.  For this reason, it is essential to take the approach of resetting the line to the original design specification.  PT&P’s approach is to:

The challenge with this approach to preventative maintenance is that it takes a much deeper level of expertise than a component level inspection.  PT&P’s experience is that even the ability to operate a Pipe Stress Modeling Software Program such as Caesar is far different than a pragmatic understanding of the proper functioning of all the elements of the piping line.  Many personnel and firms supporting Piping System maintenance are challenged with managing a broad range of equipment at an operating plant and this can make it difficult to have the depth in Pipe Stress that may be required to properly execute a System Level Audit and develop a plan to return the piping system to the original design specification.

In addition to helping our customers conduct audits, we can assist with the development of an overall preventative maintenance strategy for Spring Supports and Expansion Joints.  Almost every plant we visit is challenged by budgetary issues that limit the overall budget for preventative maintenance.  PT&P believes the best approach is to prioritize.  Figure 2 shows an example of a prioritization scheme.  We have often assisted our customers in developing an overall prioritization approach.  Prioritization is taken into account in any recommendations we make after a Pipe Stress Audit.

Case Study A: Turnaround plan and Execution for a Major Refinery

In addition to the above, PT&P provided a supervisor (Expansion Joint Technical Expert) to supervise the installation of expansion joints.

PT&P provided 2 engineers about a year before the turnaround to perform the hot inspection of the spring supports while the cold inspection was done by PT&P in previous the turnaround. All these inspected supports were documented in a report and categorized the supports condition under Good, Replacement and Adjustment required.

Based on the location provided on the inspection report, and constant communication between PT&P engineers and turnaround co-coordinators, the location where the scaffold is to be built is pre-planned.

Out of 10 units, 4 units were down in the beginning. PT&P Engineers performed a quick walk down on all the spring supports of the units to see if there are any new issues since the last inspection which required immediate attention. This gave enough time to order the materials and necessary hardware.

After the quick inspection, PT&P was provided with a few technicians for 2 different units, and adjustment and installation work at 2 units were done concurrently.

Once those units were done, PT&P engineers were mobilized to other units. There were a few new discoveries where PT&P engineers ordered materials for adjustment and replacement. Within a couple of days, PT&P managed to supply the parts (shipped through hotshot) and resolve the issues.

There were 5 times, PT&P provided the materials during the period of turnaround within 48 hours. It was very convenient to have engineers supervising the installation and repair as it allowed for design and/or engineering changes to be made on the spot.

In addition to the pre-planned turnaround work, PT&P engineers were requested on several occasions to help resolve issues such as bent struts, check the condition of counterweight (old style), some new expansion work which included the addition of new pipe supports.

Some pictures of replaced cans:

The rod was bent during the turnaround since the contractor working with the line didn’t put the travel stop while working with the line. The support should have been locked and disengaged from the system for this specific work on the pipe coming off the reactor as the line seems to have higher movement during T/A work. This was the second time the rod was bent. PT&P engineers who were on-site for other spring supports work were contacted immediately. In less than an hour, PT&P reps went to assess the condition and come up with a better and robust design. The materials were purchased as per PT&P engineers’ recommendation. Since the order came directly from the field with PT&P employees, the approval and manufacturing process was smooth and quick. Within a couple of days, the materials arrived and were successfully installed. Everything looks great during the follow up hot inspection.

PT&P supervisor gave a quick training about removing and installing the new Expansion Joints. They also pointed out the importance of being sensitive towards the Expansion Joint fabric since one small improper cut could damage the belt.

PT&P supervisor assisted the contractor with the proper marking of the backing bar while removing the old Expansion Joint. He inspected the condition of the joint and guided contractors to efficiently put the new expansion joint. He also showed the proper way to splice the fabric materials to complete the Expansion Joint installation.

Case Study B: Spring supports issues on Manifolds of a heater

Since this issue needed to be addressed to prevent any failure in the future, all the supports from the manifold were assessed properly and concluded that there is a need for system-level repair. Therefore, on the 2019 turnaround, all the spring supports of the manifold were replaced.

The following pictures show that the new supports are moving as designed and system wise-repair was indeed required. 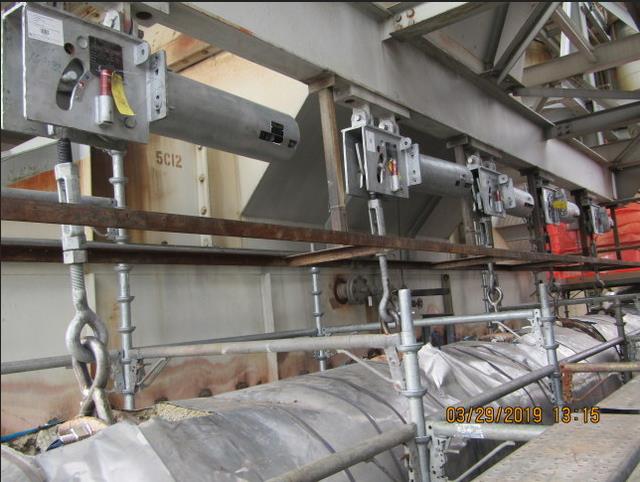