Why consider movement in all three dimensions when choosing or designing pipe supports?
Movement, a major piping design consideration

Each component of a piping system has a job to do. Making sure a system can function correctly and efficiently requires that designers thoroughly account for each component’s design from the conditions at installation (cold) to those during system operation (hot). One requirement of pipe supports, critical to every piping run, is that they accommodate pipe displacement, or movement, generated during operation without adding excessive stress to the overall system. Movement results from changes in temperature, load, or any other operating characteristics that affect the forces at play — whether inside the pipeline or in the environment surrounding the system.

Anticipating both the magnitude and direction of every possible movement during a process can be complex, but doing so is vital. If the pipe support design does not accommodate all movements properly, the finished system will likely deteriorate or fail.

Designers must always remember that movement can occur in three dimensions: axially, laterally (perpendicular to but in the same plane as the pipe), and vertically (usually parallel to the pipe support, in the plane connecting the pipe to the structural element). Failure to consider these movements could result in time-consuming and costly retrofitting or repair in addition to any labor and materials that might have been wasted, damaged, or lost. Also, designers must consider that any particular support might move more than would be reflected if only the starting and ending positions of components in a process cycle are examined. In other words, the extent of intermediate movements can and often does exceed the net movement.

Pipe support assemblies can be classified according to both their level of engagement (active or passive) and function (load-bearing, guiding, or anchoring).

We designate support configurations whose primary capabilities are always engaged as active, whereas passive support configurations simply follow the movement of the pipe during normal operation. However, disturbances such as severe weather, impact, abnormal vibration or seismic events, will activate these otherwise passive supports, which then function as active anchoring devices.

Designers must consider that the above support configurations all allow some movement depending upon the overall size, orientation, and configuration of the assembly. For example, hanger assemblies can accommodate translational motion producing swing angles of +/- 4 degrees maximum. This means that designers may be able to accommodate greater pipe movement by incorporating longer support assemblies into the design, rather than introducing additional support components.

When active and passive support assemblies, comprised of standard components, cannot meet specific system requirements, designers can add auxiliary components, which are designed to extend the range of motion that these supports can accommodate during normal operation.

In real life: the consequences of not accounting for all movement in a process cycle


The following is an example illustrating the necessity of thoroughly reviewing all movements associated with pipe deflection during a given thermal cycle. In the initial (cold) position, a hydraulic snubber, attached both to stationary structural steel via an end bracket and to a pipe element via a three-bolt clamp, was installed at a cylinder position of 1 inch extension, with a total stroke available of 6 inches. An overall analysis indicated that the final operating (hot) position of the pipe would require that the snubber extend 4.5 inches (which could be accommodated by the remaining stroke of the hydraulic snubber cylinder).

After being put into service, the seals of the snubber were damaged, indicating that the cylinder, at some point, had been completely retracted or extended. Review of the pipe’s position indicated that it was correct according to the original design specifications.

However, a more thorough review of the pipe system revealed that, prior to reaching full operating conditions, the movement of the pipe created a condition in which the overall length of the snubber should have been reduced (retracted) by 1.5 inches. But, because the original set point of the snubber allowed a maximum of only 1 inch of contraction, the continued pipe movement stressed the snubber beyond its capabilites once it reached its fully contracted position (zero extension), thus damaging the support assembly. 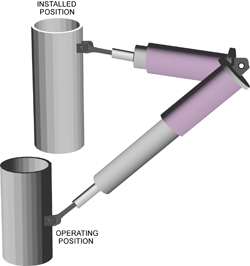 To correct the problem, the original snubber was replaced with one that had an overall available stroke of 12 inches, allowing the initial set point to be increased to a cylinder position of 3 inches of extension. This new snubber design accommodated all pipe deflection throughout the entire process cycle.

Optimal use of pipe supports

•  Become familiar with Manufacturers Standardization Society Standard Practices 58 and any other industry- or company-specific codes that apply to your project, such as American Society of Mechanical Engineers B31.1 for power and B31.3 for process engineering (both of which refer to MSS SP-58). The manufacturer and installation team should also be familiar with these standards and how to accommodate any specific requirements that apply to your project.

• Collect and use good data: Know the full range of loads and movement the piping system will handle during a full operating cycle, and remember that movement in the real world occurs in all three dimensions.

• Make note of other factors that can affect piping loads, such as temperature, weight, states of matter, and external conditions.