Any steel structure will have local areas of high stress. This may be caused by, for example, sharp corners in the design, or by inclusions in the material. At normal temperatures the material in the region of these concentrations will yield, redistributing the load locally. Typically these have no significant effect on the integrity of the structure as a whole. In brittle materials, the material cannot yield, so the only alternative is for it to form a crack. Frequently, once the crack has been formed, it will propagate at the approximate speed of sound until it reaches the end of the part, thus causing a catastrophic failure.

Further complicating the picture is the fact that the tendency for brittle fracture increases with part thickness, and this increase is temperature dependent. Clearly, temperature is a critical variable in selecting steels for cryogenic applications.

The three shoes considered are of the same basic design, but are for three different pipe sizes: 6, 20, and 42 inch. The basic design is shown in Figure 1. 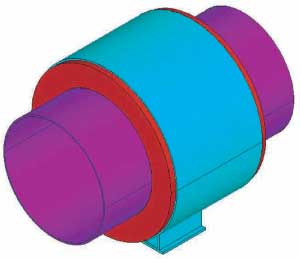 The shoes have three major components. They are:

1. An outer cover and base of carbon steel, shown in Figure 2A. This has ring stops at either end to engage the insulation to keep it from moving. A point of particular concern was the temperature and stress of the steel on the inner surface of this ring.

2. A pipe which carries the cryogenic fluid. This has an attached ring of stainless steel, again for engaging the insulation. This is shown in Figure 2B.

3. The polyurethane foam insulation (PUF) between the first two parts, shown in Figure 2C. As illustrated, the insulation has outer grooves for the shell ring stops, and an inner groove for the pipe ring.

The stress and the thermal analyses are, for the most part, quite similar. The finite element program, Ansys was used for both. There are two main differences between the analyses. Primarily, the material properties are different. Young’s modulus vs. thermal conductivity, for example; the other main difference is in the choice of elements. In this case we used Ansys element 92 for the stress analysis, and thermal element 83. These are both 10 node tetrahedral solid elements. The primary difference is that the thermal element has only one degree of freedom at each node (for temperature), while the stress element has three, one for x, y, and z displacements.

The main concern in the 42 inch pipe shoe case was the inner surface of the outer retaining rings. If the temperature is too low for the stress, the specified steel may not be appropriate according to the code.

The other two cases are very similar to this one and those stress results are given in Appendix A.

Applied loads for all three cases are given in Table1. Note that while the loads were specified in kN, the actual computations were done in inches and pounds, and the results are reported in those units.

Table 1: Applied loads for the stress analysis of the three shoes

Figure 3: Stresses in the complete assembly for the 42″ pipe shoe
(It is more informative to view the stresses on the individual components)

Figure 4 shows an overview of the stresses on the shell and base, and Figure 5 shows a detail of the stresses in the area of maximum stress. The stresses in the shell are generally quite low. However, at the intersection of the base with the cylindrical shell there is a local stress concentration with somewhat higher stresses. This should not be a problem at this location. As we shall see, the temperature here is quite high, as compared to the rest of the shoe.

The stresses in the pipe and its ring are shown in Figure 6. The stresses are largest where they would be expected, at the intersection of the two. 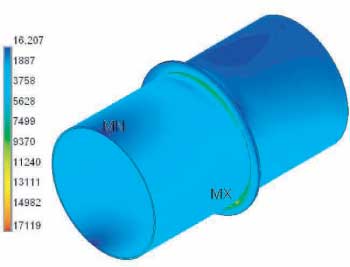 Figure 6: Stresses in the pipe and its ring

In Figures 7 and 8 we show the stresses in the insulation. Figure 7 is an overview. Figure 8 is a cut away view showing stresses on the inside. The fact that the stress is mostly in the bottom quarter is the result of the significant vertical load.

For all three shoes, the thermal conditions were the same. The inner surface of the pipe was -270°F. The ambient air temperature was -20°F, with a wind velocity of 78.74 in/sec (2 m/sec). Based on this wind speed, and the diameter of the outside shield, we computed a film heat transfer coefficient. The values for the three cases are shown in Table 2.

The values of thermal conductivities used are in Table 3. Note that for the 32 lb PUF case the coefficient is linear with temperature. For the 20 Lb PUF we had only one data point, so we were unable to use a temperature dependent relation.

Table 3: Thermal conductivities for materials used in the study 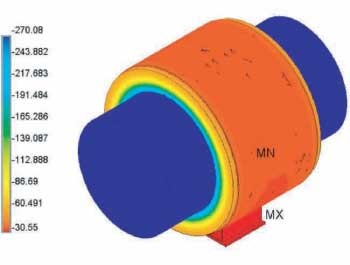 Again, it is helpful to look at the individual parts. Figure 10 shows the temperature on the shell and base. The coldest temperature is greater than -40°F, and thus much higher than the temperature that would cause concern. 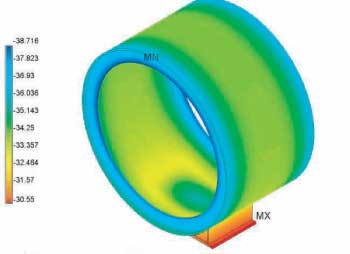 In Figures 11 and 12 we show the temperature distributions on the other two parts. There is nothing particular to note concerning these plots. (Temperatures are °F) 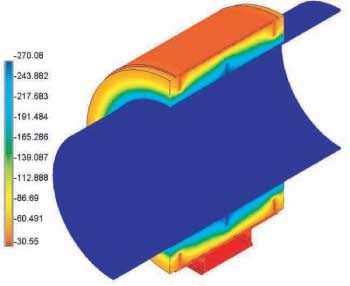 Figure 13: Section view showing interface between the steel and insulation

The report includes both the temperature and the stress at each point of the shoe assembly. This should be adequate for a proper selection of steels for the design.

In this Appendix we show the results of the stress analyses of the 20 and 6 in. pipe cases. There is little to add to what has been said about the 42 in. case. 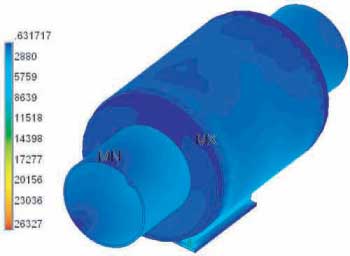 Figure A1: Stresses in 20 inch assembly 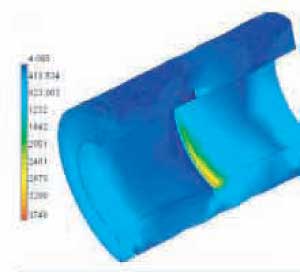 Figure A6: Cut away view of insulation stresses 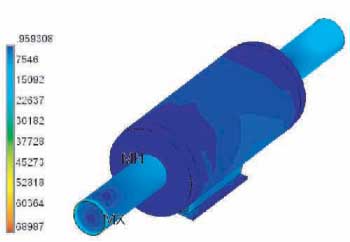 At the left, we show a expanded view of the ring – pipe intersection. The high stresses shown in Figure A10 are very local, and only near the pipe end. This is where the loads were applied. The total load is correct, and, as can be seen, stresses near the intersection are more moderate. 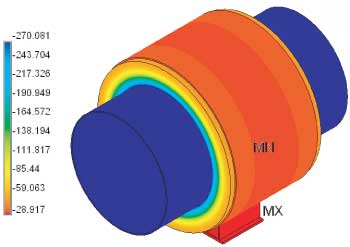 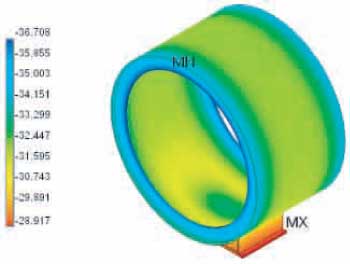 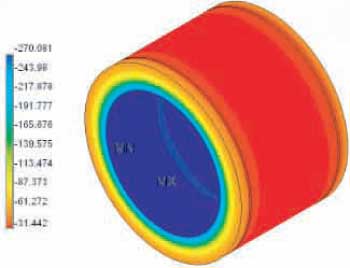 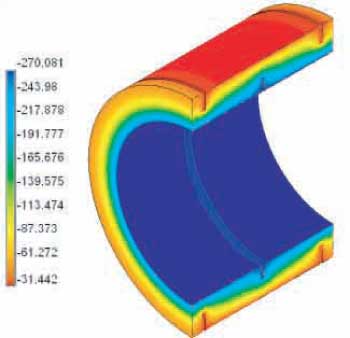 Figure B5: Cut away view of insulation block for 20 inch pipe shoe 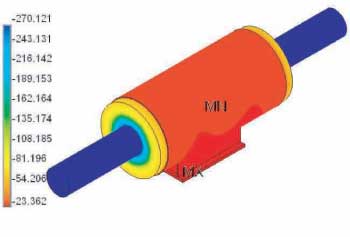 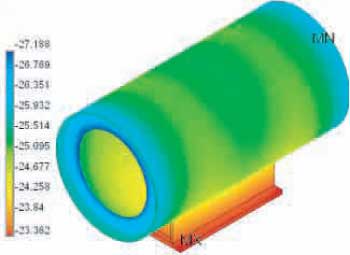 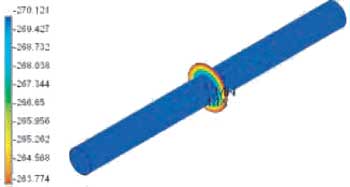 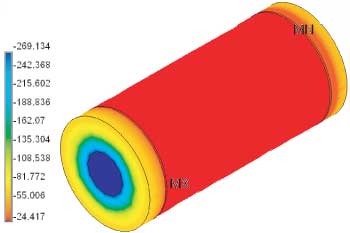