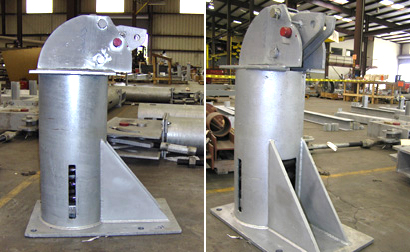 PT&P manufactured compact spring supports designed for loads up to 9,000 lb. Constants are used in Geothermal, Coker units, HRSG units, and other facilities where there is substantial thermal growth in the piping. Green energy (popular to offset carbon emissions) applications such as solar, wind, and hydro also utilize constants. The figure 100 type-F constant spring supports are designed to support piping from below using a sway strut because horizontal space was not available in the system. This vertical constant spring support was the first of its kind designed and manufactured by PT&P for the largest power providers in the South using a diverse fuel and energy supply of coal, nuclear, oil, gas, hydro, and some renewable energy. The base plate is bolted directly to the top of the steel or floor and the sway strut assembly is attached to the arm (cam) of the constant. With the constant bolted in position below the piping and the sway strut assembly attached via a pipe clamp above, when the pipe goes through its upward vertical movement, the constant maintains an equal and opposite force on the piping. If there is also horizontal movement (axial or lateral) in the piping, this type of constant is well suited because of the slight “arch” in the travel path of the internal cam. The constant in the first picture maintains a constant load of 7,000 lb. while the constant in the second picture maintains a load of 9,000 lb. on the pipe throughout its 4” of total travel. They are 36” high with two gussets at the base plate for added strength encountered under hydrotest loading. They are fabricated from A36 carbon steel and hot-dipped galvanized for corrosion protection. Standard load and travel testing were performed on both constants to ensure proper field operation. Piping Technology is a leader in the design, engineering, and manufacturing of pipe supports and our products have been in service for over 40 years.

Slide Plates & Pipe Rollers in the Fight Against Friction

Discover the secret to a lower coefficient of friction while permitting translational motion or movement with the supporting element. Learn about the different types of slide plates and pipe rollers used for various applications. View the design, load capabilities, and installation and maintenance guidelines for both slide plates and pipe rollers. See numerous photos featuring combinations with other critical pipe supports in order to allow for movement or a low coefficient of friction. Increase your understanding of the value-added services that are offered by PT&P, and rest assured that your slide plate and pipe roller needs can be taken care of by our 24×7 web-based emergency services, field service, and quick turnaround time when you need it most.

Register Now
Top
We use cookies on our website to give you the most relevant experience by remembering your preferences and repeat visits. By clicking “Accept”, you consent to the use of ALL the cookies.
Do not collect my personal info..
Cookie SettingsAccept
Manage consent